In order to get a clear and more structured view of the city of Amsterdam, where you can find some more information about how the city is geographically organized. To get an overview, let’s divide Amsterdam into several districts: Centre, North, South, West, East, South-East, New-West, and Westpoort.

In the center of Amsterdam, you will find canals, many tourists, beautiful churches, most museums, and other cultural hotspots. In the north of the center lies Central Station, from where you can travel to every city in the country, but from here you can also easily travel from one district in the city to another.

Amsterdam North (Noord) is amongst other things home to the NDSM area, an area with sheds where many artists work, trendy cafes can be found, and where quite a lot of students live. Furthermore, North has some of the greenest parts of Amsterdam and is home to many suburban families. Last but not least, various cultures disperse across the streets and therefore there are many shops offering various cultural products. North is gradually becoming more and more booming with trendy places.

South (Zuid) is known for its parks and business center called the Zuidas. In this beautiful part of the city live the generally more affluent people. If you like architecture you can see the beautiful architecture style of the Amsterdamse School here. The neighborhood de Pijp is also part of Amsterdam-Zuid. Here you can find trendy cafes, shops, and restaurants.

Amsterdam West (West) is home to the classic ‘Amsterdammer’. Residents with a somewhat modal income live mostly in this part of the city. But also here the diversity in culture is very much to be found, which gives the West a cozy and convivial atmosphere. In Amsterdam West, quiet, beautiful residential areas alternate with busy, pleasant shopping streets. If you’re looking for a place of tranquillity or busy summer days, do visit Westerpark! A great place to go for a walk or a coffee in a diverse cultural area is for example the Kinkerstraat, Jan van Galenstraat, and the Jan Evertsenstraat.

In Amsterdam East (Oost) you will find the Roeterseilandcampus, where you will be spending most of your time studying. But Science Park is also located in this district. Furthermore, Oost is mainly known for the many students that are housed here, but also for the Young Urban Professionals, the many canals, and multicultural shopping streets, like the Dappermarket!

South East (Zuidoost) is a bit further away from the center of Amsterdam. Most people who live in this area earn a little bit less than average. That is why many family homes, flats, and industrial estates are located here. If you like football: The Johan Cruijff Arena, the football stadium of AFC Ajax is also located in this area. Finally, there is a good chance that your exams will take place in the Southeast.

New-West (Nieuw-West) is mainly dominated by green parks, houses, and hip, more alternative coffee places. However, on the other side, the area is also known by its many multicultural flats and single-family houses. South of New-West is the airport Schiphol located.

Last but not least, Westpoort consists mainly of the port and industrial estates. However, new, modern residential complexes are also being built here on the border of this area, lying close to Amsterdam West. In principle, Westpoort is not really interesting to visit, but mainly a place for people to go to their work. 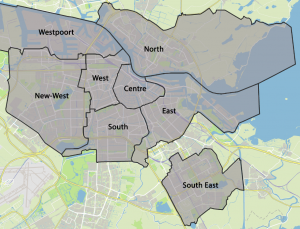 Here is a website with an overview of all the second-hand stores in Amsterdam.

The IJhallen is a flea market where you can basically get anything. It is held twice a month during the weekend. More details can be found on their website.

Another way to get second-hand stuff is Marktplaats. It is a platform to buy and sell second-hand stuff. It is very handy if you want to buy budget-friendly homeware, bikes, clothes, or anything else that you can think of. Additionally, you can also sell your stuff if you would like to make some extra money! It is important to always pay attention to not get scammed.

IKEA has everything! Loads of students buy their homeware at IKEA. You can also look at second-hand or thrift stores. Other practical stores to get homeware are the Action, the Xenos, the Hemma, and the Blokker. Action is probably the cheapest store, Xenos has all sorts of tableware,

For those who have the budget for it and prefer convenience and security above all, there is the option to contact a real estate agent who will actively look for a suitable living space for you. Be sure to check this link for an overview of real estate agents that are specialize in helping out internationals.

Loads of available rooms are posted there, and you should send an email to a room you are interested in. In the Netherlands we work with hosting evenings, where a few people interested are invited to view the room. This evening is for the people hosting a moment to see who you are and if you are suitable as a roommate for them. The key is, be patient. And keep sending emails and keep replying. You definitely won’t be invited to all the rooms you are interested in. And it will probably take you some time to find a room, so start in time. Lastly, the best way to get a room is via your network. A study association such as VSPA can help you meet new people and expand your network.

There are other very handy websites that you can make use of while searching for an apartment.

Funda is a website where you can search for apartments and studios. It showcases houses for every budget range. Always read the descriptions very carefully to see if the house is suitable for students because some house owners do not want students renting their properties. You cannot apply for a house directly through the website, however, you can arrange viewings, which are always recommended to have before applying for the house! You do not need to pay any money to use this website.

Pararius is a website very similar to Funda. The only difference is that Pararius has more advanced filters that come in handy especially if you are searching for a house for more than 2 people. Many houses in the Netherlands do not allow 3 people to register at the same time unless they are a family. On pararius you can see whether registration is possible through the filters and the descriptions of the houses. If you want to find an apartment/studio, check out their website.

Kamernet is a website that lets you rent a room in an apartment. If you are struggling to find roommates, Kamernet might be the best option for you! You can directly apply for a room through their website, however, you need to pay to have a premium account. Without a premium account you cannot apply for the houses, nor can you schedule a viewing. The monthly fee for the subscription is €34 but there are other subscription options as well. To get a more clear picture, check out their website.

The University of Amsterdam itself also offers help to link students to a house. Throughout the city there are buildings with only UvA student rooms. So you will also be surrounded by fellow students. There are four different types of rooms with their own price range. This site explains everything very clearly, so be sure to take a look!

Student housing in the Netherlands is scarce. In Amsterdam, it sometimes takes years before you find a room. That’s why it’s important to arrange housing as soon as possible.

ROOM.nl is a platform that offers student housing. When you come from abroad ROOM offers priority for some rooms. When you are assigned a home by an educational institution for the first year, it still is important to register as soon as possible and build up registration time to increase your chances after this first year.

Go to ROOM.nl, check out how it works and register quickly. It will cost you €35 and gives you an 8-year